Moves made to boost bonds with firms in development area 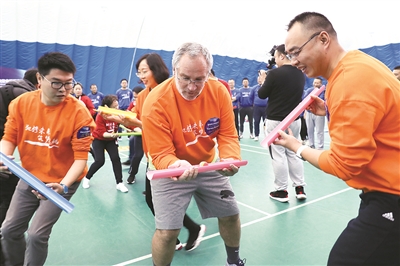 A special round of sport matches and physical activities were held in Tianjin Economic-Technological Development Area or TEDA on Nov 26, between teams composed of administrative staff from the zone and employees of companies based there, according to local officials.

Officials said the initiative was an innovative move arranged by the local government to deepen connections to companies in the area.

In addition to the traditional sports items such as badminton and tug of war, the organizers also added other creative activities to test and improve team work.

In a Ma Liang Magic Brush activity, three ropes were tied to a one meter high brush while six participants held a ropes by their ends, and then worked together to guide the brush to write TEDA on drawing paper.

The result was labelled as being "amazing" by foreign managers from FAW-Volkswagen Tianjin Branch, who organizers said marveled at the Chinese art.

After the game, Wang Guofu, general manager of FAW-Volkswagen, gave a thumbs up to Yu Mei, head of the zone's committee.

"There is one more thing that I would like to ask the committee for help,” Wang asked. “There are many single young men in our company looking for partners. Can you help?"

Yu Mei said that would be no problem.

"To help them build a family here is also part of our job," he said. Yu said she could tap her contacts with the local labor union, youth committee and women's federation to organize friendship and match-up activities for young staff in the resident companies.

Officials said Binhai New Area – which is home to TEDA -- has also moved to streamline applications for hukou, or household registration, for employees in the area.