Tianjin Binhai New Area has become a major hub to absorb the non-capital functions of Beijing and promote the coordinated development of the Beijing-Tianjin-Hebei region.

Official statistics show that an increasing number of Beijing-based companies have launched operations in Binhai New Area since 2015. A total of 1,699 projects in the area have been initiated by companies from Beijing over the past four years, amounting to an overall agreed investment of 392.06 billion yuan ($58.35 billion). Companies such as China Communications Construction Company have launched production centers in the area.

Unicloud, a subsidiary of Chinese chip maker Tsinghua Unigroup, specializes in providing cloud services to clients around China. It launched its headquarters in Binhai New Area in May 2018.

Unicloud is a beneficiary of the area's supportive policies for professionals. It recruited 668 technical professionals in just a few months last year. More than 400 out of the 668 people were based in Tianjin. Some staff members from other cities are planning to move their families there.

"The establishment of Unicloud's headquarters will help Tianjin to transform into a smart and digitized city," said Jiao Gang, co-president of Unicloud.

Wu Xiushan, deputy head of the development and reform committee of Binhai New Area, said that the area has paid attention to professional recruitment and services in recent years. For instance, service offices were established to help talented people solve problems related to hukou, or household registration. One-stop offices have been established to issue work permits, residence and permanent residence permission to foreigners. The region also relaxed some limitations on foreign experts in service sectors, for instance, work experience and age, to lure more high-caliber talent.

Binhai New Area has long been committed to expanding its traffic network to better connect the area to Beijing and Hebei province. Currently, Beijing, Tianjin and key neighboring cities in Hebei province are connected by high-speed railway networks that offer a journey time of under an hour.

Combined sea and rail transport services in Binhai New Area are being promoted in Beijing and Hebei. The area also partnered with China Railway Beijing Group to open one of the largest railway container centers in the Beijing-Tianjin-Hebei region.

More expressways that will better connect the new area with other parts of China, especially Beijing and Hebei, are under construction.

Three expressways were built which allow goods from Xiongan New Area to be transported to sea ports more efficiently, according to local officials.

For areas co-managed by different cities and which have difficulties achieving an effective administrative mechanism, Binhai New Area has explored new ways to tackle pollution. For instance, a communication mechanism has been put in place so cities can coordinate air pollution control. 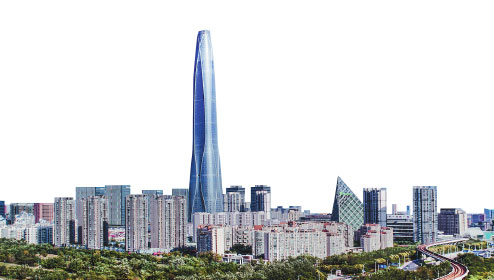