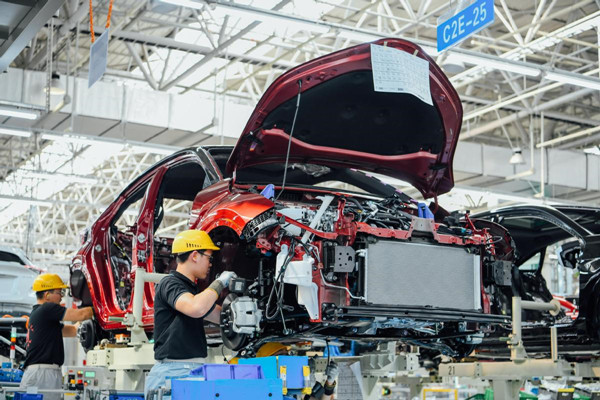 "High-tech companies are expected to contribute 30 percent of the added value of the district, and strategic emerging companies, 40 percent of that," said Yang Maorong, director of the coastal area, which will mark its 10th anniversary late this year.

The district's ambition is expected to be supported by its solid local economic foundations.

Binhai's GDP grew 5.4 percent year-on-year in the first half of this year, accounting for 39.2 percent of city's total.

Hefty investment in its high-tech and strategically emerging industries including pharmaceuticals, new energy and high-end equipment manufacturing, is expected to cement its economic growth.

During the first half, a total of 2,262 projects were established in the district, with an investment of 191.2 billion yuan.

To further aid economic growth, a massive reform of government administration and services is taking place in the district, after a global recruitment campaign for the deputy heads of the five local development zones since April.

Five people were selected last month from among 1,056 applicants.

After the reforms, 80 percent of employees will be devoted to offering services and winning new business and investment.

The district is also reducing red tape for local companies.

To date, 597 approval procedures were given to lower level authorities in a bid to facilitate business in the area.

Chao Shoubai, COO of Binhai-based CanSinoBio, the maker of the world's first anti-Ebola vaccine approved by a national government in October 2017, said: "Since the founding of CanSinoBio 10 years ago, the Binhai government has provided solid support to us, striving to create a top-level business climate."

Zheng Weiming, head of the Tianjin Economic and Development Area, the economic engine of the district, said: "At Binhai, TEDA is keenly aware of the challenges ahead to sustain its high economic growth rate.

"The reforms should be launched with even much bigger steps, fundamentally addressing current problems such as bureaucracy."