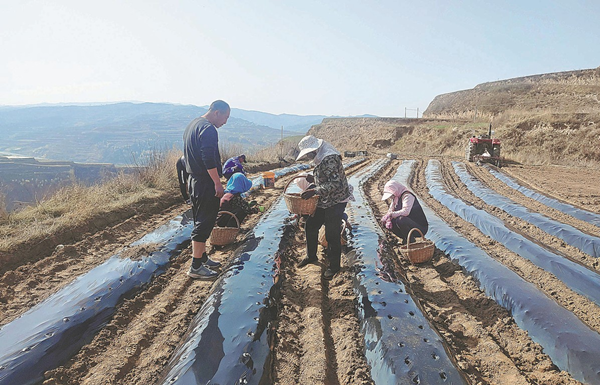 Han Genhu, a 46-year-old farmer from Zhuanglang county in Gansu province, has been working in his fields for 20 days, planting, laying mulching film and fertilizing. As he did, he wasn't alone, as he was receiving real-time instructions from a professor at Nankai University in Tianjin via video link.

Wang Chunguo, the professor in question who works at Nankai's College of Life Sciences, dealt with Han's problems patiently and offered suggestions to help the farmer overcome problems he encountered during planting.

The sight of green seedlings growing rapidly gave them both a sense of satisfaction, and Han said that he was greatly relieved, as more than 90 percent of the seedlings survived.

The seedlings are danshen, or red sage, a root proven to benefit the cardiovascular system, according to traditional Chinese medicine.

Han said that he has been planting TCM herbs for more than 20 years along with many other farmers in Zhuanglang, one of China's poorest areas, but that harvests had not been all that good.

"It often happens that the planting and management methods lag behind the latest understanding, which is why the results there were disappointing," said Wang Jianpeng, a teacher dispatched by Nankai to take part in the county's poverty relief campaign as Party chief of Dongmen village.

In 2012, the State Council pinpointed 310 institutions, organizations and universities to help support poverty relief in 592 impoverished counties, and Nankai University was chosen to help with Zhuanglang, which is 1,400 kilometers from Tianjin.

Since 2013, the university has sent more than 100 experts to help with poverty relief and to support education and economic growth in the remote mountainous county, which covers an area of 1,553 sq km and is home to a population of 447,600.

In 2020, the county was removed from the national list of poverty-stricken areas thanks to their help, but instead of resting on its laurels, the university continued to offer support and consultation.

"Our research group successively cultivated over 30 varieties of danshen over several thousand hectares on an experimental basis on planting bases in provinces, such as Shandong, Shanxi, and Hebei, as well as Tianjin," Wang said.

"Eventually, we selected the best quality, most disease-resistant varieties that were the most suited to the climate and soil conditions in Zhuanglang. They proved suited to continuous cultivation on the land there, too."

He projected that harvests could increase by 50 percent and decided to plant 0.66 hectares with the crop in Dongmen village, adding that the new danshen crop is expected to generate some 50,000 yuan ($7,240) for local farmers and could be harvested as early as this October.

The farmers have named the new variety "NK No 1" in gratitude to the Nankai experts, who have even helped them contact companies in Tianjin to purchase the crop once it's harvested.

The danshen patch is only part of Nankai University's contribution to Zhuanglang. It has also planted sweet potato, apples, and other TCM herbs－including dahuang, or Chinese rhubarb, which has anti-inflammatory properties.

It also created a series of e-commerce portals as well as supermarket channels in Tianjin to boost the sale of local products, and the university and its alumni have donated some 10 million yuan to build 46 classrooms in the county.