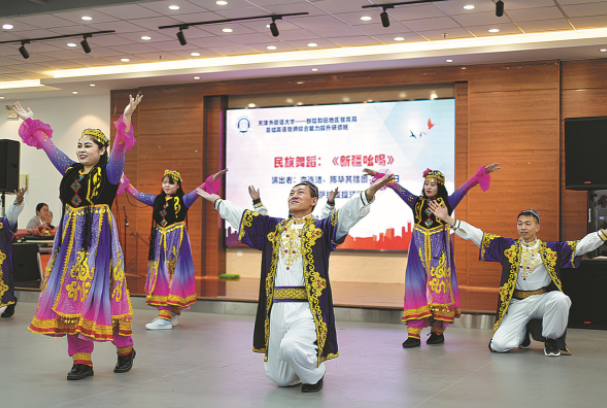 Primary teachers from Hotan prefecture in the Xinjiang Uygur autonomous region perform a folk dance during the ceremony. [Photo provided to China Daily]

The teachers from Xinjiang were trainees on a three-week course that began in mid-October to help them improve their English teaching proficiency and broaden their theories of language education.

The course, which was specifically designed, was given by leading faculty members from the prestigious university.

"The strong faculty and diverse, tailor-made modules have significantly expanded our horizons, boosted our proficiency in English teaching and improved our teaching skills, and we express our sincere gratitude," Li said while reading from the letter at the course's closing ceremony, which was held in November.

He also submitted weekly reports from the teachers showing the improvement in their studies at the ceremony, where they performed a Xinjiang folk dance to express their appreciation.

"The English teaching techniques and the professional experience of the university instructors impressed us," Li said.

Some teachers reported that one of the instructors, Zheng Peilin, used himself as an example of how important it is for English teachers to make learning the language a lifelong process.

Zheng said he has been honing his English language skills since he was young. His persistence paid off when he was invited to work as a translator and interpreter for the Beijing Organizing Committee for the 2008 Olympics Games.

"His real life experience touched us the most," one of the reports wrote.

The top-notch training course was part of Tianjin's efforts to help Xinjiang improve its educational capacity and overall development.

In 2019, the university arranged for 180 teachers and graduate students to go to Xinjiang to participate in the first course, according to Yin Qi, Party chief of the university. Eighty trainees－25 from high schools, 25 from junior high schools and 30 from primary schools－were enrolled in the course. The second course was moved to the university.

Last year, only 14 trainees were enrolled due to the pandemic.

Xiang Chengdong, dean of the School of English Studies at the university, said, "Training content is divided into three sections based on what the students need－theory updates, development of teaching proficiency, and language proficiency and self-development."

To the delight of the involved professors, feedback from the trainees showed they were very satisfied with the course.

"They are very positive about this program. They think they have benefited a great deal from the training, and what they have learned is very helpful for their own teaching and self-development," Xiang said.

"Leaders of the local governments in charge of this program think the training has contributed to the development of Xinjiang's education capacity and its economy."