Life gets better and brighter in Baodi

In the first three quarters of 2021, the region's GDP increased by 9.7 percent year-on-year, general public budget revenue increased by 4.1 percent, and the per capita disposable income of residents increased by 10.2 percent. It is estimated that 10,500 new jobs have been created throughout the year. 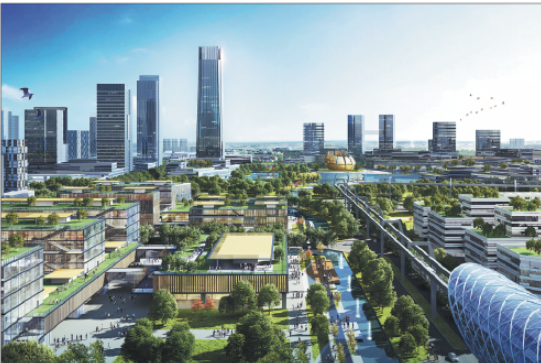 Large-scale afforestation has been carried out for years, and green land covers 35.6 percent of the district. It has also integrated the “sponge city” concept into the area’s urban renewal projects.

Old houses, roads, and pipelines have been updated, and services in education, medical care, culture, and elderly care have been improved to meet more needs.

Chaobai River National Wetland Park is an important achievement in preserving the local ecology. Tourist villages have been built along the route, creating an eco-tourism sightseeing belt.

The introduction of 116 projects from Beijing has boosted the district’s scientific and research momentum. Its growing traffic network further boosted the connection of the Beijing-Tianjin-Hebei region. The Beijing-Tianjin Zhongguancun Science Town accelerated the pace of its development over the past five years. It has 578 registered enterprises, and has become an important cooperation platform between Beijing and Tianjin.

Strategic emerging industries such as new energy and new materials, high-end equipment manufacturing, biomedicine, and new-generation information technology have developed, with an output value that accounted for more than 30 percent of the total output value of industrial enterprises above designated size－those with an annual revenue of more than 20 million yuan ($3.12 million).

The district received some 3.8 million tourists annually over the past five years, and modern service industries such as leisure tourism and modern logistics have become new growth drivers.