As part of celebrations of 70 years of diplomatic ties between China and Pakistan, the Pakistan Ambassador to China Moin ul Haque and his wife visited Tianjin and participated in a series of celebratory activities on Sept 17.

Moin ul Haque and Luan Jianzhang, head of the Foreign Affairs Office of the local government, inaugurated the celebrations with 500 overseas students and enterprise staff.

A China-Pakistan Friendship Marathon was also held. A large number of Pakistani and Chinese nationals participated in the marathon. The ambassador and Luan distributed prizes among the winners of the marathon. 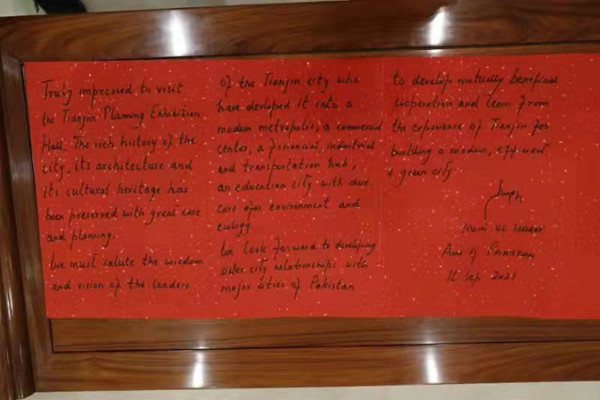 After his visit to Tianjin Planning Exhibition Hall, the ambassador wrote a letter in which he spoke highly of Tianjin’s rich history, well-preserved architecture and cultural heritage.

He also marveled at Tianjin’s planning and development as a “modern metropolis, a commercial center, a financial, industrial and transportation hub, an education city with due care for its environment and ecology.”

Luan said over the years, Tianjin and Pakistan have maintained good exchanges and cooperation. The two sides have had frequent high-level exchanges, extensive cooperation in economic and trade investment, production capacity, vocational education and other fields. They have achieved fruitful results, which has continuously injected new impetus into the development of China-Pakistan relations and the construction of the Belt and Road Initiative. They are the manifestation of warm and cordial relations between the two friendly countries and people.

Seventy years is a new starting point. Tianjin is willing to take it as an opportunity to continue to deepen exchanges and practical cooperation between the two sides, Luan added.

The ambassador expressed hope for developing sister city relationships between Pakistan cities and Tianjin to develop mutually beneficial cooperation and learn from the experience of Tianjin for building a modern, efficient green city.