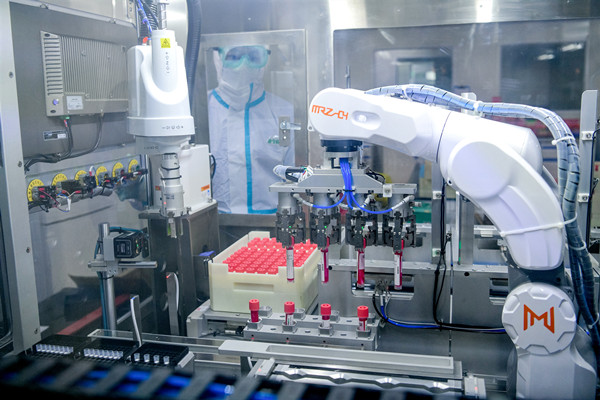 A village in Shanghai's Pudong district, where a COVID-19 case was reported on Nov 9, was reopened on Tuesday after a 14-day lockdown as a medium-risk region for the spread of the novel coronavirus.

All of the nearly 3,000 residents of the Yingqian village in Zhuqiao town took nucleic acid tests on the first, sixth and 13th day of the lockdown, and all tested negative, an official from the village said.

"The residents showed highly cooperative attitudes during the lockdown and were replenished with food through government support once every two days," Ma Jie, Party secretary of the village, was quoted as saying by local media Jiefang Daily.

Separately, on Tuesday, the Kanhaixuan residential community in Tianjin was the country's only high-risk area for COVID-19, and eight communities or subdistricts in Shanghai, Tianjin, Manzhouli city of the Inner Mongolia autonomous region and Fuyang city of Anhui province, were categorized as medium-risk regions owing to the recent confirmed cases.

Shanghai reported its most recent case on Monday, the sixth local case reported since Friday and the seventh this month. Five of the total were imported cargo workers at the Shanghai Pudong International Airport, and two of those workers' wives were the other two cases.

In Tianjin, an asymptomatic patient who tested positive on Nov 10 began showing symptoms and was diagnosed as having a mild case of COVID-19 on Monday during quarantine, the Tianjin Health Commission said.

Tianjin reported no positive coronavirus tests for all residents in its Binhai New Area, and several sections in the area will downgrade their alert levels on Wednesday, officials said on Tuesday.

"The area has started to conduct universal screening since Saturday morning among the 2.46 million residents and finished the sample collection work on Monday evening," Liang Chunzao, deputy director of Binhai, told a news conference on Tuesday night.

"All testing results reported on Tuesday morning came back negative for the coronavirus."

A pig head imported from North America was confirmed as the source of the recent COVID-19 outbreak in Tianjin, said Zhang Ying, deputy head of the Tianjin Center for Disease Control and Prevention.

In Inner Mongolia, bus services were suspended starting Tuesday in Manzhouli to keep people from gathering and curb the spread of the novel coronavirus, the local government said. The city reported two new local cases of COVID-19 on Saturday. Citywide nucleic acid tests for all the residents started on Sunday, and sampling was completed by Tuesday afternoon.