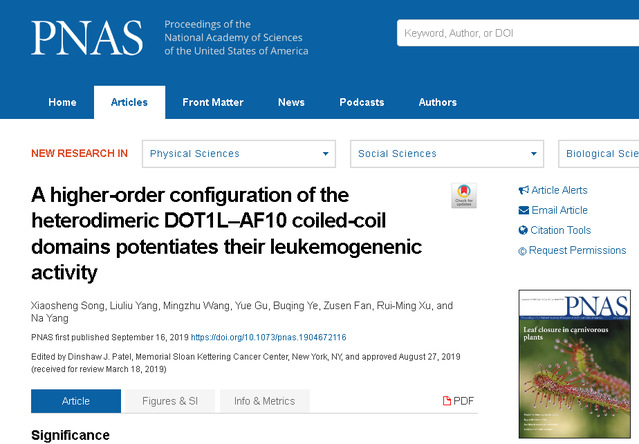 The research group led by Yang Na from the Medical College of Nankai University and the National Key Laboratory of Medicinal Chemistry and Biology, together with the research group led by Xu Ruiming and Fan Qusen from the Institute of Biophysics of the Chinese Academy of Sciences, conducted a study that revealed that the MLL1-AF10 fusion protein passes the OM-LZ domain of AF10 and the Coiled-Coil domain of the uncatalyzed DOT1L domain, then forms oligomers, which can trigger the molecular mechanism of acute leukemia. This discovery provides an important basis for the development of related drugs, and also provides new ideas for the treatment of acute leukemia. The paper introducing the study was published online in Proceedings of the National Academy of Sciences (PNAS).

Through research, it is known that the chromosomal ectopic of the MLL1 (mixed lineage leukemia 1) gene is closely related to the occurrence of acute leukemia, and about 5%-10% of adult acute leukemia and 60%-80% of infantile malformed leukemia is caused by MLL translocation. MLL1 with a chromosomal translocation combines with other proteins to form oncogenic fusion proteins. These fusion proteins retain the DNA localization region of MLL1 and lose the catalytic domain of SET methylase in order to carry the function of the fusion protein to the MLL1 regulated gene region. For example, MLL1-AF10 fusion protein can recruit histone H3K79 methyltransferase DOT1L through AF10 (acute lymphocyte leukemia-associated gene of chromosome 10), up-regulate the methylation level of histone H3K79 in the MLL1 localization region, and cause an abnormally high expression of genes associated with leukemia, which is regulated by downstream gene clusters such as MEIS1 and HOXA, triggering the occurrence of leukemia.

Previous studies have found that the human MLL1-AF10 fusion protein interacts directly with DOT1L through the OM-LZ domain of AF10. However, the molecular mechanism of interaction between DOT1L and AF10 remains to be revealed. The design of agents interfering with the interaction also provides new ideas for the treatment of acute leukemia triggered by MLL1 fusion proteins.

Based on this idea, the joint research team of Nankai University and the Institute of Biophysics of the Chinese Academy of Sciences first determined that the four series of Coiled Coil (CC) domains of human DOT1L is the section interacting with the OM-LZ domain of AF10. Further analysis revealed that the first two CC domains interacted more strongly with AF10 and formed an oligomeric form of octamer in solution. With the support of X-ray crystallography, the researchers analyzed the first two CC domains of DOT1L and the crystal structure of the AF10 complex. Structural analysis revealed that the interaction of DOT1L-AF10 was mainly dependent on a leucine zipper structure.

More importantly, through structural analysis the researchers obtained key residues in the two major interfaces formed by octamers in physiological states. Through intracellular fluorescence colocalization experiments, the researchers further demonstrated that the key residues formed by the above octamer did not affect the interaction between DOT1L-AF10. By means of leukemia colony formation assay and nuclear staining observation, the oligomeric form of the DOT1L-AF10 complex was verified, showing that, like the interaction between the two, it was critical for the proliferation and dedifferentiation of leukemia cells. The chromatin immunoprecipitation and quantitative PCR were used to verify the important effect of this oligomeric form on the recruitment of DOT1L to specific gene regions in MLL1-AF10, which in turn affected the expression level of downstream leukemia-related genes.