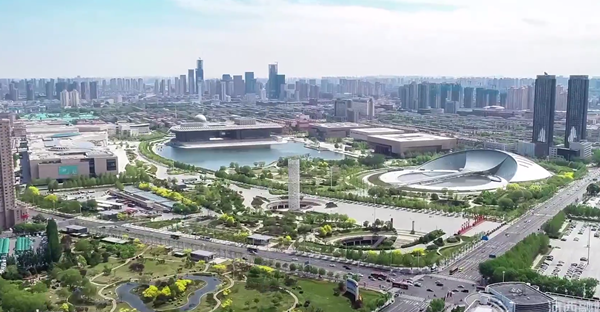 Hexi district of Tianjin is well on its way to becoming a moderately prosperous society with high quality in all respects.

Hexi's economic achievements in the past 70 years are very notable; the figures speak for themselves.

The district has a regional GDP exceeding 100 billion yuan ($14.52 billion) and contributes about one-quarter of the added value of Tianjin's financial industry. It has 29 buildings valued at more than 100 million yuan, ranking first in the city, and the value-added of its service industry accounts for 97 percent of Tianjin's total.

Hexi is speeding up industry upgrading and increasing the momentum of new development drivers, bringing a steady improvement to its economic structure.

Sticking to an innovation-driven strategy, the new industry structure is turning more and more to emerging industries such as financial services for business.

Supported by the design industry, the sales revenue of science and technology and research services has reached 6.57 billion yuan, a year-on-year increase of 16.8 percent.

In addition, the district is home to 77 technology-based enterprises with a scale of over 100 million yuan and another 3,700 at city-level.

Committed to being up to date, the region has gathered more than 700 financial institutions.

Famous companies and key projects have settled in Hexi, and almost 700 Beijing-Tianjin-Hebei enterprises are setting up branches there.

Efforts have also been made to lift living standards with better infrastructure and building renovations. Due to housing reform of 102 communities, 512.88 million square meters of old residential buildings have been improved and made available for residences.

In addition, community landscaping has been improved with more green plants and gardens.

Enriching cultural life and activities are also included. Over 2,000 performances and exhibitions have been held.