The area of Tianjin first appeared in historical documents in the Tang Dynasty(618-907) as San Hui Hai Kou (literally "estuary of three rivers").

Adjacent to the sea and rivers, Tianjin enjoys distinct geographical advantages. After the opening of the Beijing-Hangzhou Grand Canal in the Sui Dynasty (581-618), Tianjin became an important node between the canal and the sea, hence a hub of waterway transportation. Tianjin has played a significant role in the economic exchanges and development between the North and South of China.

After the middle period of the Tang Dynasty (618-907), Tianjin became a hub for the transportation of grain and silk from the south to the north. The establishment of Zhiguzhai in the Jin Dynasty (1115-1234) and Haijin Town in the Yuan Dynasty (1206-1368) demonstrated both Tianjin's military significance and its role as a center of grain transportation.

In 1400, Zhu Di led his army southward across the river through what is Tianjin today and seized power in 1403, when the reign was changed to Yongle. In 1404, Tianjin was established as a military base. In 1405 and 1406, 2 garrisons (wei) were deployed on the left and right of Tianjin, respectively. In 1652, the garrisons and the town were merged into one, collectively known as "Tianjin Wei". The building of the town and garrisons was therefore a key period in the history of Tianjin, and the prosperity of river transport paved the way for the later development of Tianjin. Since its founding in 1404, Tianjin has existed as a city for 614 years till 2018.

Tianjin is one of the first Chinese cities to come in contact with modern western civilizations. After 1860, Tianjin became a pioneer of opening in the north and a base of "Westernization Movement", breaking new grounds in military modernization and the development of railway, telegraph, telephone, modern education, etc. 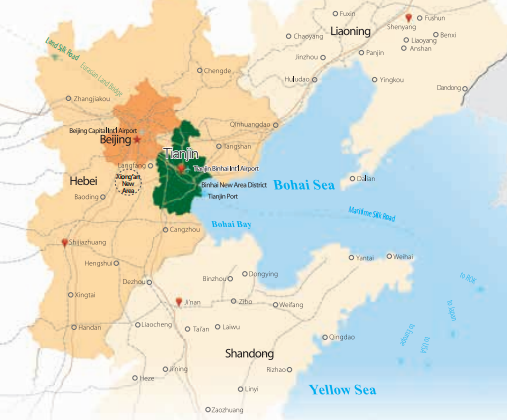 Tianjin is located on the west coast of the Pacific Ocean, in the convergence zone of the Beijing-Tianjin-Hebei Urban Agglomeration and the Bohai-Rim Economic Circle. It is also the meeting point between the eastern Land Silk Road and the northern Maritime Silk Road in the Belt and Road Initiative, as well as a starting point of the Sino-Mongolian-Russian Economic Corridor. Backing onto North, Northeast and Northwest China, it boasts vast economic hinterland. Facing Northeast Asia and the Asia-Pacific economic circle, it is an important window for China's participation in regional economic integration and economic globalization, as well as a channel for landlocked countries to have access to the sea. The port resources constitute the core strategic resources and the greatest advantages of Tianjin: Tianjin Port sea routes now cover all the major ports in the world; the world's top 3 shipping alliances have all opened their largest liner lines with Tianjin Port. Now, Tianjin Port is on its way of becoming a "golden node" on the 21st century Maritime Silk Road.

Blessed with 5 strategic opportunities (namely the coordinated Beijing-Tianjin-Hebei development, the construction of the free trade pilot zone, the construction of independent innovation demonstration zone, Belt and Road Initiative, and the opening up of Binhai New Area), the advantages of Tianjin's location have become more prominent, and urban vitality and competitiveness have been further inspired. Tianjin will give full play to its advantages in location, ports and industrial clusters, focus on deepening the Beijing-Tianjin-Hebei cooperation, serve China's new strategy of opening-up to the outside world, and strive to become a new fulcrum of the Belt and Road Initiative and a hub of global resource allocation.