Every morning at Tianjin University, 100-year-old professor Yang Enze takes a 15-minute walk from the Expert Building to his laboratory in the School of Electrical and Information Engineering, regardless of the weather conditions, weekends or holidays.

"I have never seen him take an elevator, and he walks up to his laboratory on the fourth floor," Ma Chuang, a PhD student at the school, said. "Inspired by his passionate spirit, we also go to work during the weekends and holidays with him."

According to his colleagues, Yang cannot remember every one of his students' names, but he can remember all of their research focuses and the kinds of experiments they are working on.

"Yang keeps on helping us revise our theses despite his age," Ma said.

During the last winter holiday, Yang went to South China to visit his relatives, but he also took many of his students' theses with him and came back with his revisions. 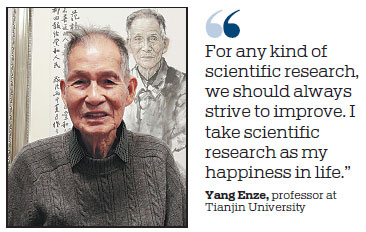 He was one of China's forerunners in optical communication research, and was chief engineer of the country's first fiber optics communication project launched in Wuhan, capital of Central China's Hubei province.

He has also completed several research projects under the national 863 Plan - the top scientific project in the country.

"In 1978, the government announced development of the research and I was nominated as the chief in charge," he said.

"At that time, there was no research in the field, and there was critical demand in China to close the gap with the world.

"After four years of hard study, the project succeeded, and it was a milestone in the country's optical communication sector in 1982," he added proudly.

Yang has not ceased his efforts in research. In the last three years, he has focused his research on artificial intelligence, which is at the forefront of global research.

Yang's passion for research dates back to when he was a student.

In 1937, he was enrolled into Wuhan University.

However, the War of Resistance Against Japanese Aggression (1931-45) was ongoing, and some of his schoolmates died. Hence, the university was forced to move to another province in 1938.

He said he was in deep anguish during that period. "I formed my determination to pay back the country with my scientific research," Yang said.

His colleagues said he began to learn how to use a computer at the age of 60, and mastered using a special teaching software called Matlab at the age of 80, and he still played tennis at the age of 93.

Yang cannot remember how many students he had taught, though some of them have become academicians at the Chinese Academy of Sciences.

Apart from his scientific research, he is also committed to charity work.

To date, he has donated up to 500,000 yuan ($74,500) to impoverished students in his hometown of Enrao county in South China's Guangdong province.

He founded a teaching building in Suocheng town in Guangdong with a donation of 300,000 yuan.

However, he is not "generous" to himself.

His furniture and clothes are all out of fashion, and even some parts of his clothes have faded.