Coinciding with the 45th anniversary of the establishment of diplomatic ties between China and Malaysia, the International Percussion Performance was held by the 24 Festive Drum Club founded by the Malaysian students at Tianjin University (TJU) on the night of March 30.

The 24 Festive Drum performance, conceived by Malaysian musician Chen Huichong and poet Chen Zhaofan in 1988, combines the features of Guangdong lion drums and traditional Chinese calligraphy. It was listed as Malaysia's national intangible cultural heritage in 2009. 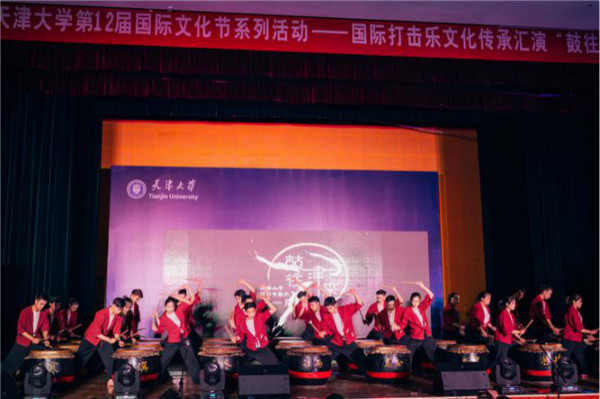 In his greeting speech, Mo Zelin from Malaysia, Chairman of the Association of Graduates from Universities and Colleges of China expressed his hope that the 24 Festive Drum Club of TJU should shoulder the responsibility of inheriting and promoting Malaysian's drum culture and become a culture envoy between China and Malaysia. 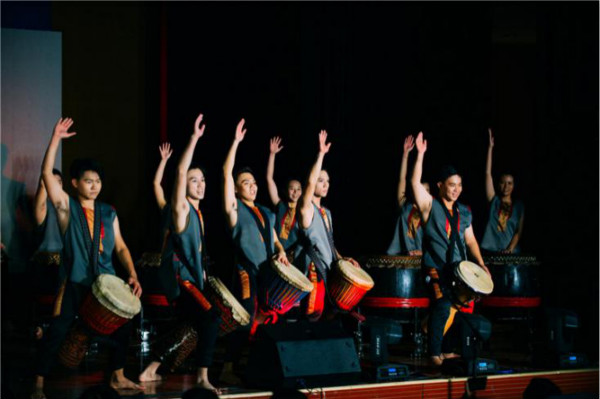 TJU drum club performed the first dance "The story of Tianjin", an original creation telling the stories of how Tianjin people rose up in a shamble wreaked by war and looting in the early 20th century.

The performance reached its prime when the two professional Malaysian drum teams put on their show, four pieces of dance in a row, vividly bringing on stage not only ethnic Chinese culture but also cultures of other ethnic groups in Malaysia. The heart-touching drumbeats, the robust and lively dances, the fascinating folk songs and the passionate shouting amid performances, all together triggered waves of cheers and applauses from the audience. 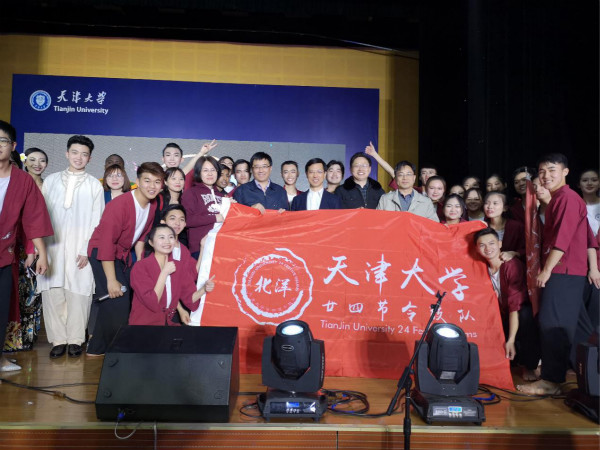 Teachers and students take photo with drummers and workers. [Photo provided to exploringtianjin.com]

Simon from Czech Republic, currently a graduate student majoring in architecture at Tianjin University confessed that he had never seen anything as extraordinary as this before.

"The drum art is really amazing." Gao Pengfei is Chinese graduate student from the School of Chemical Engineering and Technology. He was impressed by the "marvelous" performances.

As a Chinese, he said he felt the connection between Chinese traditional culture and the 24 festive drum culture. "To me, the drum dance seems fresh yet familiar due to common culture background," Gao said.

According to Chen Zhihua, Dean of the School of International Education, the number of Malaysian students choosing to study at TJU has grown leaps and bounds from one student in 2016 to sixty-nine students by now thanks to the Belt and Road Initiative. The university has always focussed on fostering inter-cultural communications among international students through activities like the International Cultural Festival and Reading China activity.