Save water, save life 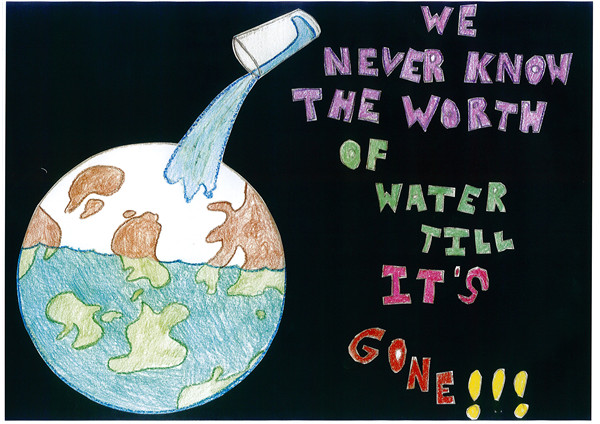 An award-winning poster painted by kids

Water is essential to life. Without water, life ceases rather quickly. In some places water supplies are insufficient (水资源紧张 shuǐ zīyuán jǐnzhāng). Even America isn't immune to droughts. California is one of the most populous states in the country and has its fair share of water related restrictions when resources are running low. Tianjin like China’s capital Beijing has a relatively dry climate despite being not too far from the Bohai Sea and having the Haihe River running through it. These natural water resources can be deceiving though in terms of actual available water supply. The water we use at home and drink may not come from these sources. Therefore, just because oceans and rivers are nearby, that doesn't mean water shouldn't be appreciated and conserved.

Water conservation has been a real issue for the global family for some time. According to www.imdb.com an educational music collection known as "Schoolhouse Rock!" ran from 1973-2003 includes a 2009 episode entitled "You Oughta Be Savin' Water." In that video, the catchy chorus is: "If you're not conservin' water, you oughta, you oughta!" The lyrics highlight a number of core water conservation techniques and the benefits. For example, it says, fixing that leaking faucet can save 20 gallons a day and taking a minute shorter shower and using a water saving head can save 1,500 gallons a month. Another fantastic line in the song is: "It's ok to use me, but please don't abuse me."

The song above clearly was created to educate a younger audience, which is where the problem often starts. As humans, many lifelong bad habits start during childhood. For that reason, the example set by adults, both in the home and at school is very important. Around Tianjin it seems countless public bathrooms have signs posted imploring visits to conserve water, such as: 节约用水 (jiéyuē yòngshuǐ). Oddly enough, while the intent of these signs is good, it is arguable that public restrooms are hardly the greatest source of water waste.

In asking many different people, including expats and locals, teachers and parents, one thing became very apparent, there wasn't a ton of official, large scale educational events going on when it comes to water conservation. While everyone of course had a general awareness and mentioned a few minor attempts to help children be water conscious, nothing really jumped out in terms of a major effort to make a real difference. Since children spend so much time at school, it is a good idea to strengthen and increase the understanding of water issues via routine and memorable educational events. While the song mentioned earlier is cute, it may lack real long-term effectiveness. Children need to hear things over and over again. In addition, helping children to understand why water conservation is so important may be the hardest job of all. Telling them what not to do, is relatively easy. But usually falls on deaf ears. Education efforts need to be consistent, age appropriate and reach the heart. 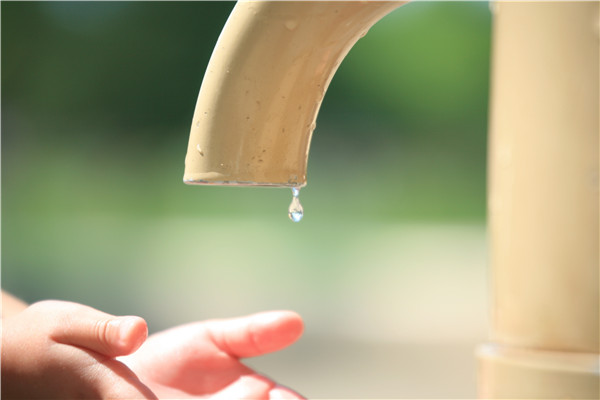 Outside of school, the home may be one of the biggest training grounds in a child's life. Therefore, how the parents and grandparents handle water will no doubt affect the child. A famous PSA featuring a dad confronting his son about drug use coined the phrase: "I learned it by watching you!" along with a bold warning: "Parents who use drugs have children who use drugs." That principle applies with many things, including wasting water. Parents who live a life conscious about water usage, likely will instill such good habits in their children even without a constant verbal harping.

The opposite tactic to providing a positive example perhaps is public shame. For example, in some places in China, people who jaywalk get broadcast on a huge screen shaming them in front of masses. When it comes to food, water and other resources, different slogans such as "waste is shameful" (浪费可耻 làngfèi kěchǐ）and other similar "highlight the negative" expressions are being seen and heard in various places. Comparatively speaking, there are two entirely different ways to motivate humans. One is fear and another is love. Fear tactics tends to stress the bad and demand all to avoid the pain associated with a certain course of action. Such as being publicly shamed, scolded, or fined. Essentially, it is more of a push. On the flip side love pulls people in the right direction. People who are motivated by love and not by fear, possess a genuine desire to do something good and reap the rewards for doing so. It has little to do with avoiding pain but rather enjoying the pleasure of a clean conscience and happy heart.

When it comes to water conservation, clearly there is an ongoing need around the world to promote as the song says: 'use and not abuse.' Tianjin locals actually appear to be living fairly water friendly lives. Why? For one reason, many are very frugal. Using less water may have less to do with conservation of water and more to do with saving money! Water isn't free. Expats may become quickly aware of how serious locals are when it comes to conserving resources that cost money. On the positive, Tianjiners don't do a lot of car washing, because most either don't have a car, or lack a place to wash it near their apartment. Neither do they waste a lot of water by watering the lawn or cleaning things with a hose, because often the opportunity doesn't even exist. The basic constructs of Tianjin life add up to automatic water conservation. That said, we can all limit waster such as leaks around the house, excessively long showers and unnecessary water use. Few things bring death faster than no water. In case of an unexpected water shortage, it has been recommended that each person always have stored enough bottled water for 72-hours. Life can be saved both by having and saving water!