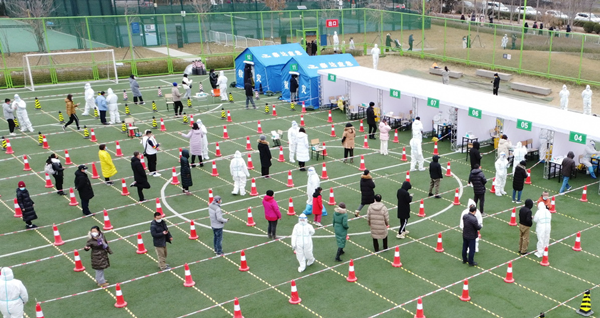 People line up for COVID-19 tests at a testing site in Tianjin as the municipality rolls out its second round of citywide nucleic acid testing on Wednesday. [Photo by Zhou Wei/For China Daily]

Zhang Ying, deputy director of the Tianjin Center for Disease Control and Prevention, said the peak period for local infection occurred from Saturday to Monday, with most of the city's patients and asymptomatic carriers having been detected in those three days in the early stage of the outbreak.

"That indicates authorities have introduced effective measures, including mass nucleic acid testing and screening and the lockdown of COVID-related communities for strict management, to curb the spread of the novel coronavirus at the early stage, with initial results achieved," Zhang said at a news conference.

She said some hidden patients and asymptomatic carriers might still exist in local communities and might cause sporadic outbreaks in the days to come.

"And this is the reason why we have launched a second round of citywide nucleic acid testing starting at noon on Wednesday to help seek the possible patients and asymptomatic carriers to block local community transmission," Zhang said.

She urged residents to actively cooperate with authorities to facilitate nucleic acid testing.

Zhang said the novel coronavirus might have existed in the city during the New Year holidays from Jan 1 to 3, as some after-school classes in kindergartens had not given leave to children.

"These children might have contracted the coronavirus during the holidays and then infected other kids who returned to the kindergartens on Jan 4 when the holidays ended," Zhang said.

The children then infected their parents after school, resulting in local community outbreaks, she added.

The city had 137 people who tested positive in the latest outbreak as of Wednesday.

Han said authorities are now busy conducting a second round of citywide nucleic acid testing to find other possible carriers.

"A total of 77 residents were detected to be positive in the previous round of nucleic acid testing that saw more than 12.5 million residents tested from Sunday to noon on Wednesday," she added.

Sun Zhiliang, a senior education official from Tianjin, said education departments immediately introduced effective measures to curb the spread of the novel coronavirus on campuses after the local outbreaks were reported on Saturday.

Zhang Boli, an academician at the Chinese Academy of Engineering, said the COVID-19 outbreak in Tianjin could be brought under basic control by the Lunar New Year holiday beginning in February, but that would depend on the overall screening situation in the weeks to come.

In Henan province, a total of 118 new locally transmitted COVID-19 cases were reported on Tuesday, the provincial health commission said on Wednesday.

The new cases included 12 detected in Zhengzhou, the provincial capital, 65 in Anyang and 41 in Xuchang.

All residents of the county must stay at home, except for those providing necessary supplies or dealing with prevention and control, emergency response or rescue, it said.

Vice-Premier Sun Chunlan said differentiated and targeted measures for pandemic control were implemented to fight the pandemic during her investigation in Henan, which was hit by a COVID-19 outbreak at the end of December.

Sun, who is also a member of the Political Bureau of the Communist Party of China Central Committee, visited supermarkets, factories, schools, quarantine sites, hospitals and communities in the cities of Zhengzhou, Yuzhou and Anyang, where local outbreaks have been reported, to learn about lockdown management, medical services and the flow of needed supplies.

She urged government departments to strengthen testing, epidemiological investigations and prevention and control measures to achieve the goal of clearing community infections outside of quarantine as soon as possible.