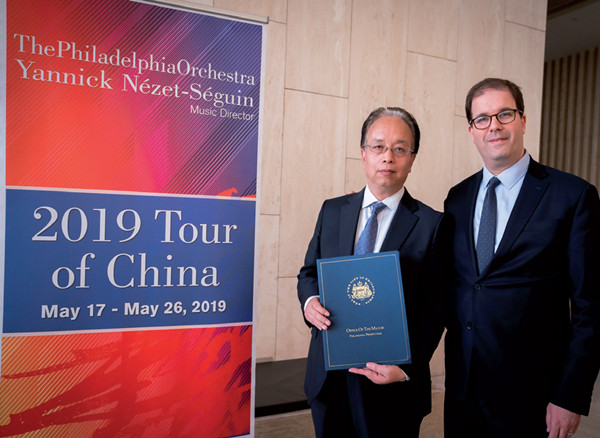 Experts and municipal officials from China and the US see potential in city-level bilateral relations and are hoping to strengthen such ties at an upcoming summit in Houston, Texas.

"There are so many opportunities between our two cities (Philadelphia and Tianjin)," Siobhan Lyons, president and CEO of Citizen Diplomacy International, a Philadelphia organization that facilitates subnational international exchanges, said in an interview with China Daily a week before the 4th US-China Sister Cities Mayors' Summit.

The two cities established a sister cities relationship in December 1979, months after the establishment of China-US diplomatic relations. It is one of the oldest sister-city pairing between the two countries.

"It is definitely one of our most important relationships. And it [Tianjin] is one of the cities that we are most invested in," said Lyons, who sees many similarities between the two port cities.

Exchanges have been happening in various fields, including education, trade, culture and business investment, and Lyons said the future focus will be on education and biotechnology development — fields in which both cities excel.

Technology incubators from both cities, Philadelphia-based Science Center and Tianjin-based Joinscience — are building relations, and the two cities are entering a three-year action plan to promote education, establishing platforms to encourage more students to explore sister cities, according to Lyons.

The two cities' World Trade Centers signed a memorandum of understanding in 2017 to increase international business between the two regions. And Winners Law Firm, an affiliate of Philadelphia-based White and Williams LLP that was established in Tianjin in 1995, was, according to Lyons, "a result of the sister city relationships".

"There are a lot of exchanges and talk" over how both cities can promote each other, said Lyons, who sees "lots of room for partnership".

As the two cities enter their 40th year of sisterhood, both sides are sending delegations to enhance and celebrate the relationship.

A high-level Chinese delegation is set to visit at the end of July to talk about opportunities in educational cooperation and building links between high schools, with three delegations of civic and business leaders from Philadelphia scheduled to visit China before the end of the year, Lyons said.

Such high-end municipal visits and exchanges are happening in other sister-city pairings.

"We'll take this opportunity to strengthen the economic and trade communication between Dalian and Houston," said Liu Guozhi, deputy director of the Dalian Municipal Bureau of Commerce, who will attend the Mayors' Summit.

Dalian, the northern Chinese city that has been the sister city of Oakland, California, for 37 years, has established friendly or cooperative relationships with other US cities, including Houston and Dallas, Texas.

"I will meet the potential partners and invite them to visit Dalian," said Liu, who will attend a matching meeting for industries during the forum, with a focus on the petrochemical industry and advanced manufacturing.

While the China-US bilateral relationship has encountered some tensions recently, Wei Hongxia, researcher at the Institute of American Studies under the Chinese Academy of Social Sciences, said the city-level cooperation has seemingly been unaffected by national disputes so far.

"We don't have any plans to change our position on Tianjin," said Lyons.

"It's important to not lose sight of the fact that we've had 40 years of a very strong relationship. A small blip here or there will not necessarily upset that applecart, and that as long as individuals can keep on talking, we can find solutions," she said.

Wei, who pointed out that subnational-level governments in both countries are more down to earth and navigate issues such as employment, environmental protection, and taxation, said communication is crucial.

"Now is a time for us to focus on subnational cooperation and facilitate that through ways closer to the people from both countries, and to find places where we could supplement and appeal to each other," she said.

The concrete cooperation and exchanges on the grassroots-level actually "lay the foundation of the development of the China-US relationship", she added.